Washing the harm away – Special project 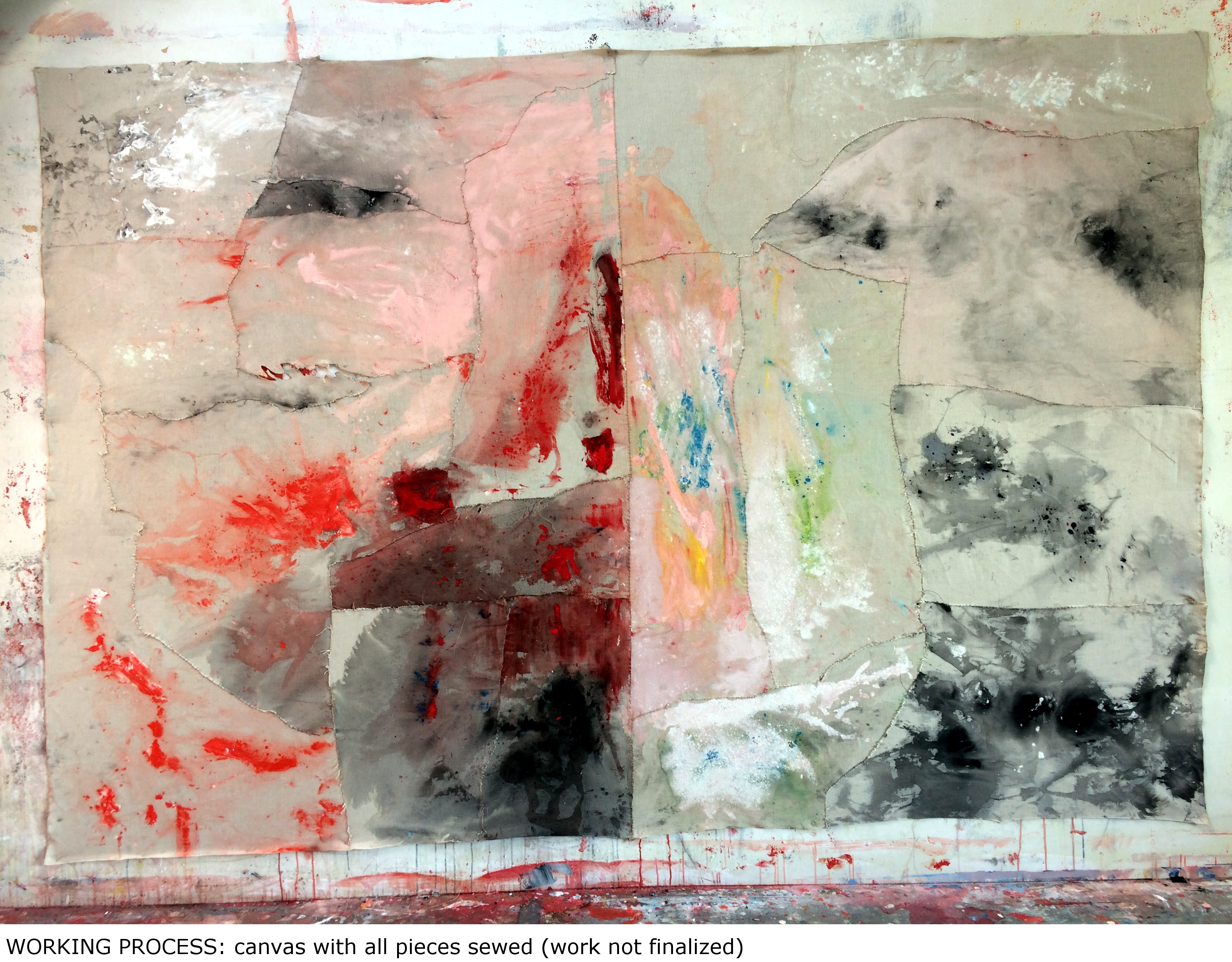 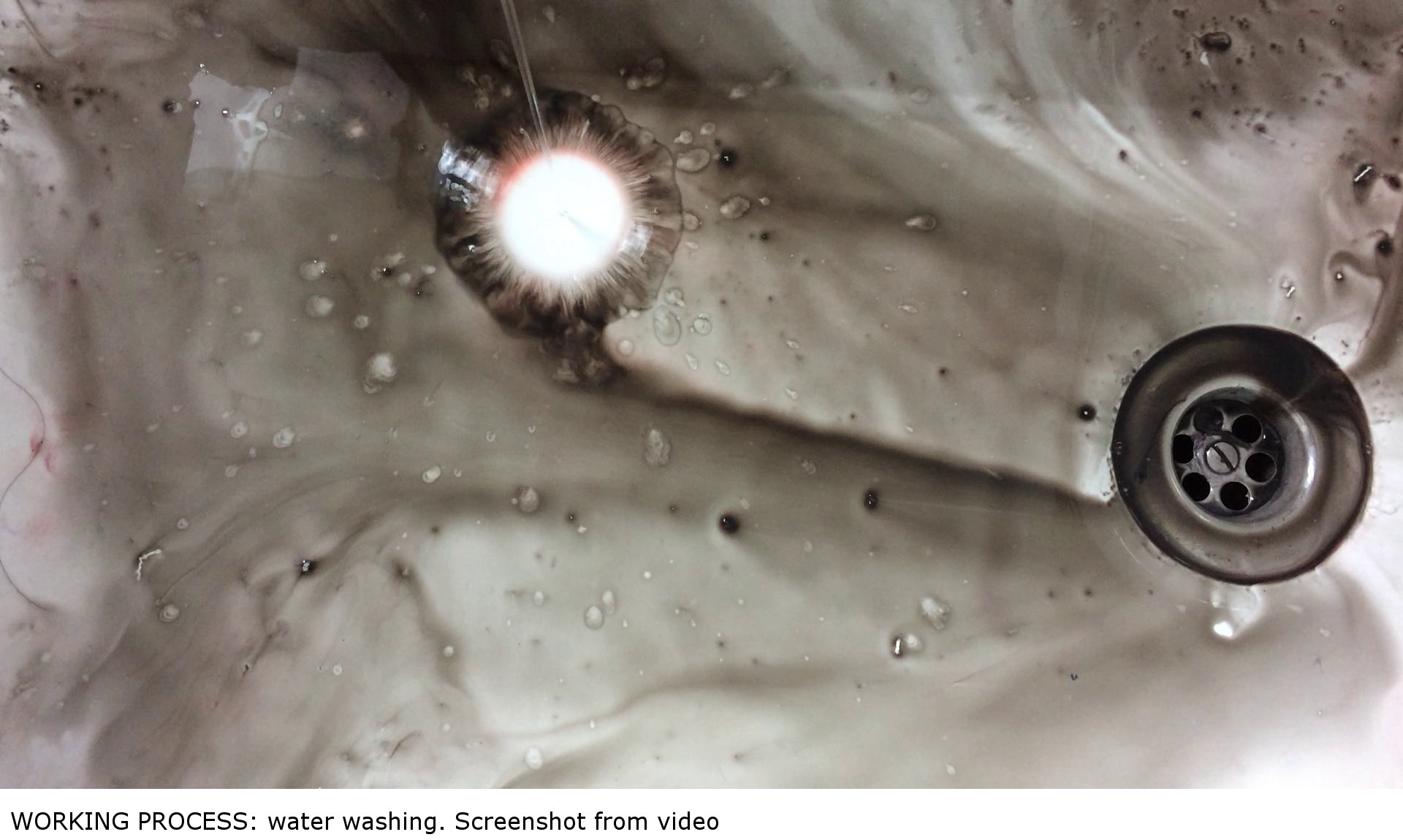 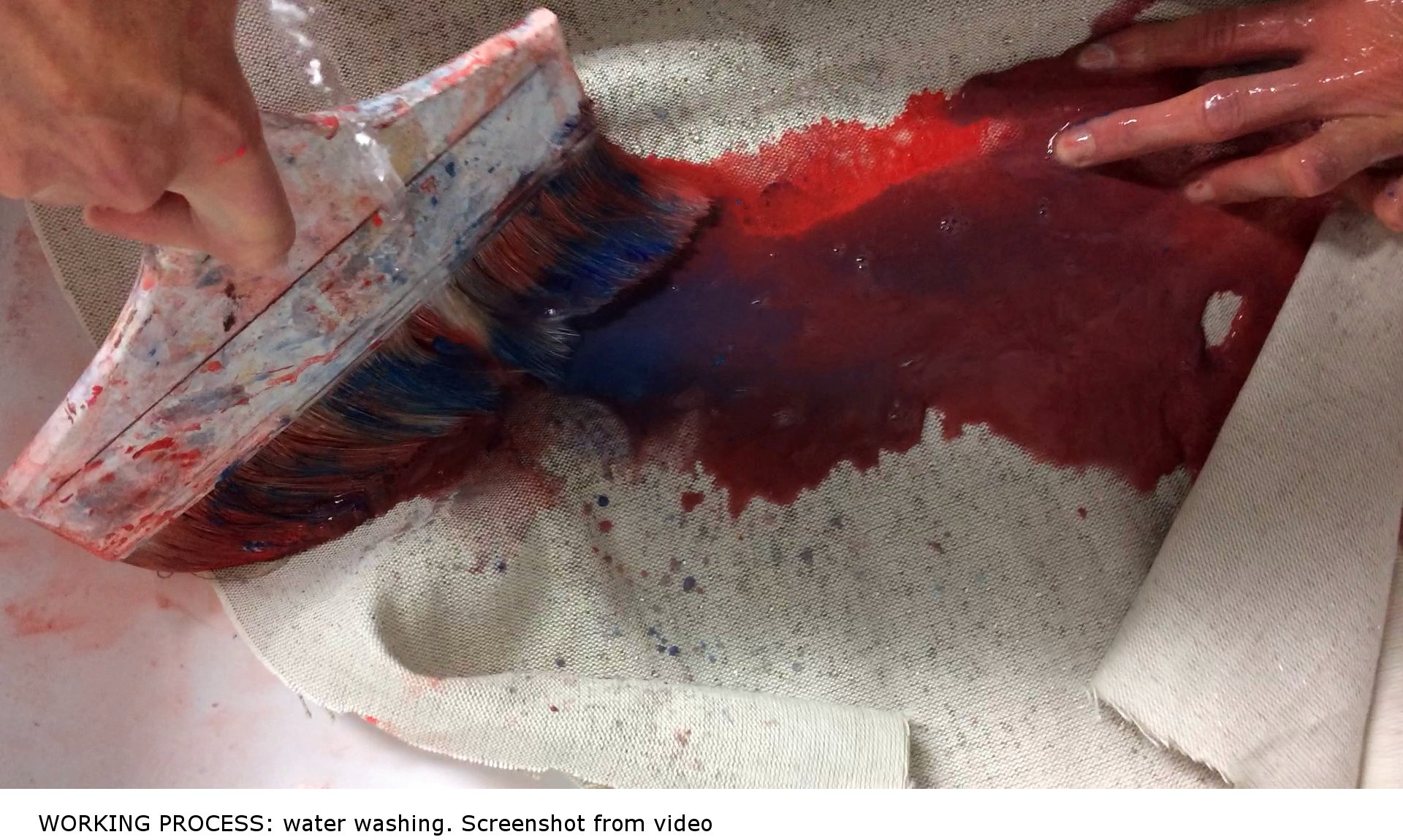 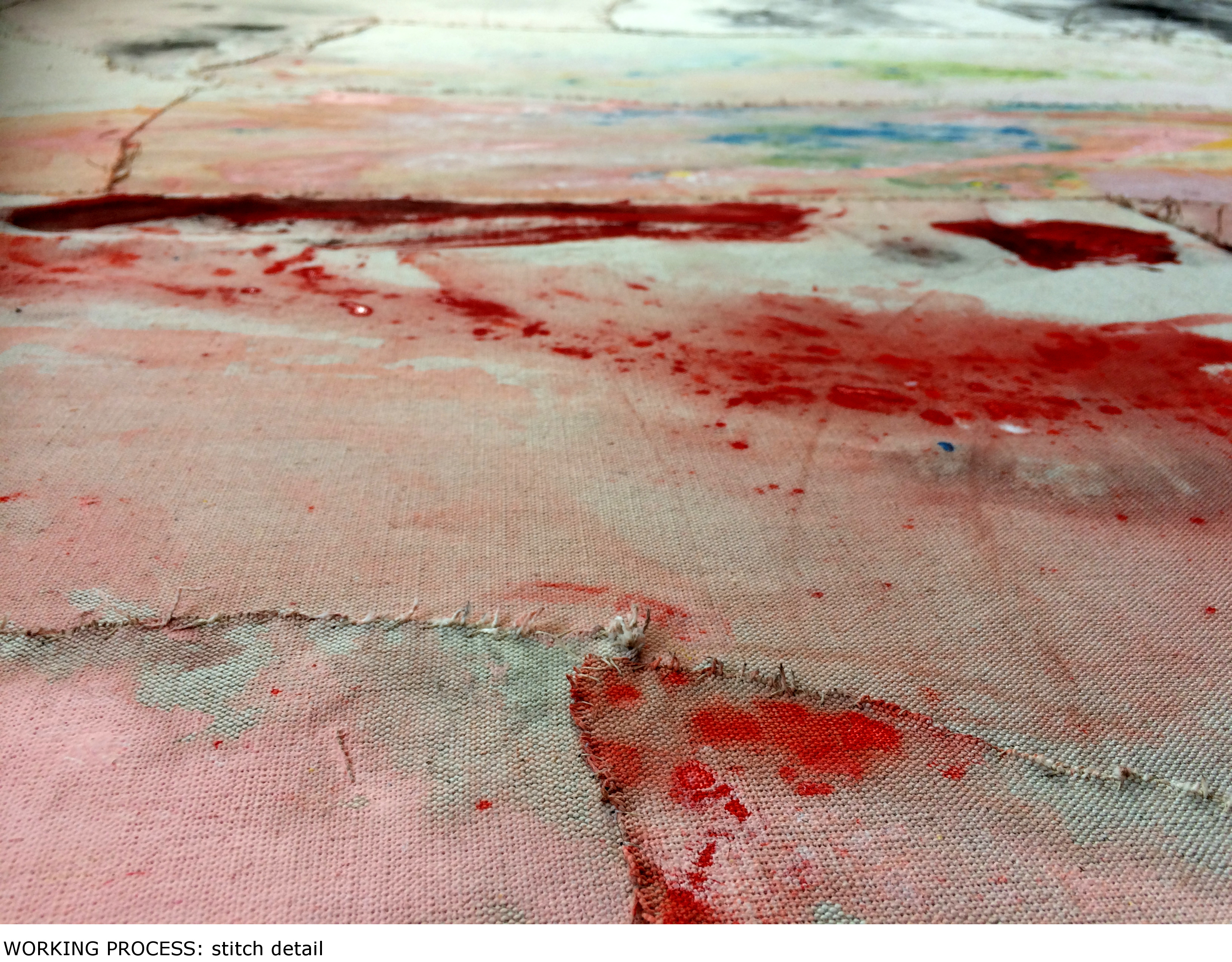 I am taking a single daily act with water and showing it as a necessity and a blessing.
I’ve made an artwork that has been developed in four stages as the four important points of reflection when you get hurt, exploring the role that water takes, physically and conceptually (getting injured, washing the wound, repairing, and healing).
I use the painting as a metaphor of re-generating the human weave. I show a display of vulnerability and emotional relationship.
I reflect on water as the beginning of a transformation: when it, as a form of matter, meets another substance, it washes the unwanted. The relationship developed between both elements represents the one between humans and nature. In this case this is represented in a sense of calling for help: you need water to wash your wounds in order to be safe.
The realization of this work was motivated by my son surviving a septicaemia.

TITLE: Washing the harm away
YEAR OF REALIZATION: 2018
TECHNICAL CHARACTERISTICS:
Painting:
– Dimensions: 185 cm. x 278 cm.
– Materials and techniques: 18 pieces of cut linen washed and sewn, conform a picture painted with acrylic and charcoal.
Video
– A video file with the recording of part of the realization process of the work.
– Duration: 5 minutes and 49 seconds. 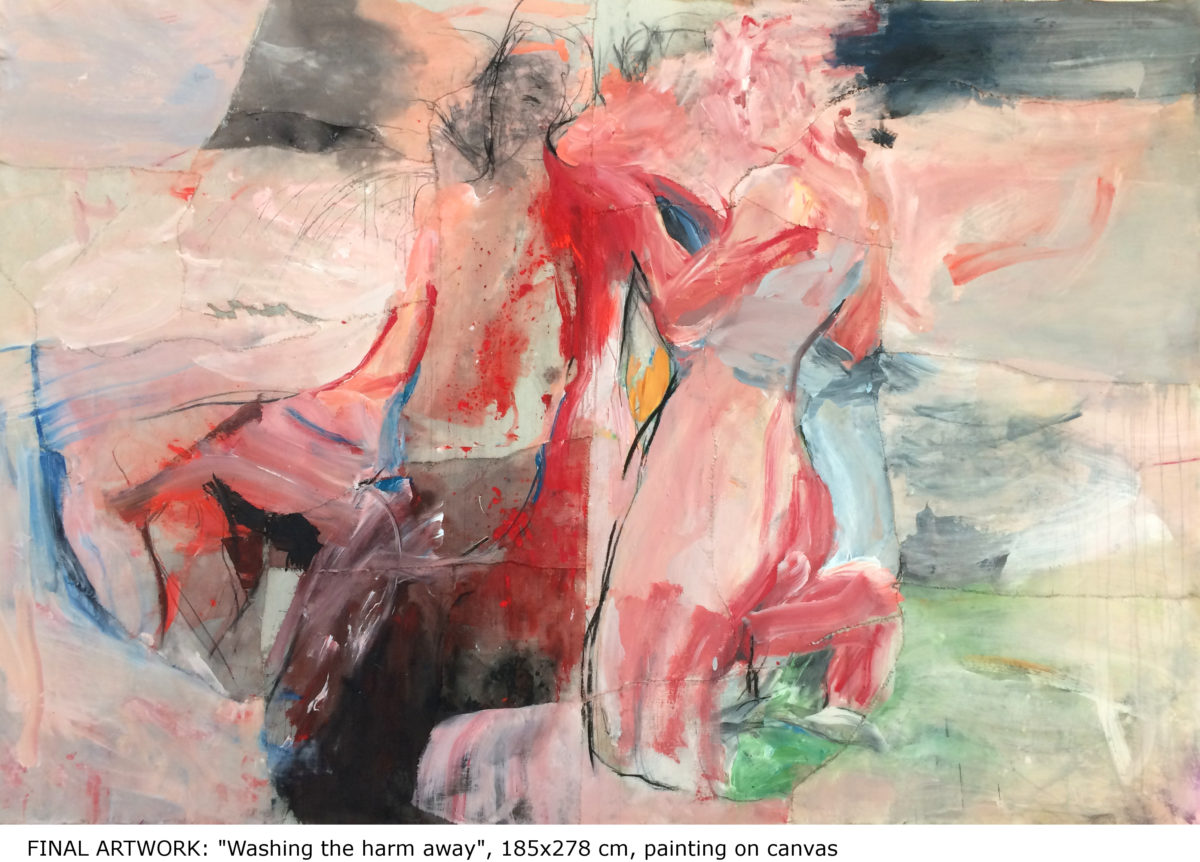 In an ode to water I celebrate its generous power of healing against harm: washing the wounds offers the possibility of regenerating the weave and so to cure. It´s a way to being safe. It arises a feeling of protection from the ones who care. This link is reflected in the two figures, symbolized in an act of love in between them, along with the nature in which they are surrounded. I´ve wanted to re-create this atmosphere of landscape in a gesture of exposure of the figures. Being able to see them unprotected from the wild, they project however a mimicry with that to which they are exposed to.
My artwork is based on the meticulous observation of all its visuality and features, which provokes an impulse that takes me to act about it and with it. That intuitive first colour and that first gesture dismantle a whole spectrum of sensations that melt and flood one another. And they all meet in an only surface.
The coexistence of contradictory elements is equal to the search for beauty as a basic objective in the act of painting.
Always saving the symbology of the relationship between form and meaning, I´ve kept to the following process that consists of four parts:
1- The harm: I cut the fabric in 18 unequal pieces 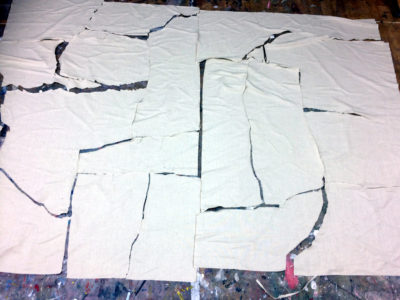 2- The wash. The water washes the wound. During this process I wash several paintbrushes that I normally use, placing each piece of fabric in the depth of the sink. Under the tap I detach the paint off the brush, so the coloured water flows onto the fabric. I carry out a recording of this (I contribute a selection of fragments).
The observation of what water does when it starts washing my brush full of paint makes me reflect on some of its qualities:
– Fluidity as a way of connection
– The cyclic sense as a temporary structure
– The capacity of relief substances, how it split them apart…
The water flows with the instinct as a principle of uncertainty. It could be an expression of freedom. It has started a path of joining because of its fluidity. The movement is triggered towards a connection to another element to meet with. It runs as it washes what it finds at its path.

3- The repair. I stitch piece by piece trying to compose the puzzle again.
This part is a kind of meditation which needs patience. I am focus on the aim of repairing the damage.

I reflect on the concept of union: each piece comes along with the others bringing its own character in order to compose a global thing.
My actions correspond to the perception of the surface as a whole, following without forgetting the lines of union of each piece. They are an important part of the structure and significance of the artwork as scars that could be episodes of our memory.
At this point, water has formed a pattern which works initiating the figures.
After a deep observation, the image has already stablished itself in me, it stays in the margin of the representation so to centre on the search of sensations that said image can provoke.
4- The re-generation, the healing. The painting shows how the damage is regenerated.
What is important to me, talking about painting?
I try to get an identification between matter and gesture as two inseparable things. When the colour on the fabric and the gesture that has provoked it show a perfect match, it triggers a thought about touch in a way which I can grasp what I imagine no matter how abstract the concept is: painting the wet skin, or capturing what I was afraid to lose, the body´s movement… or the vocabulary of gestures in general.
Ultimately this is about analysing the aspects of human beings such as fear, pain, protection, love, hope, and reflecting on how they happen in time. The relation between them allows me to find answers.